To continue pulling bits of wisdom and inspiration from different podcasts, I’d like spotlight something that was said on a recent episode of the Dead Robots’ Society. Started by the late Justin Macumber, the DRS podcast now boasts over 500 episodes in its back catalog. The current hosts are authors Terry Mixon and Paul E. Cooley, and the show is just as important to me now as it was when I first discovered the podcast so many years ago.

In a recent episode (Episode #557 – And…more tech support hell), Terry and Paul spoke about genre. This is a topic that’s come up several times over the course of the podcast, and as someone who’s writing in multiple genres, these episodes always have me paying extra attention.

The conversation this time was less about writing in multiple genres and more about the trappings of multiple genres being present in a single story or book. And while this is something I feel like I’ve known a long time, hearing Terry say something here really struck a chord within me. 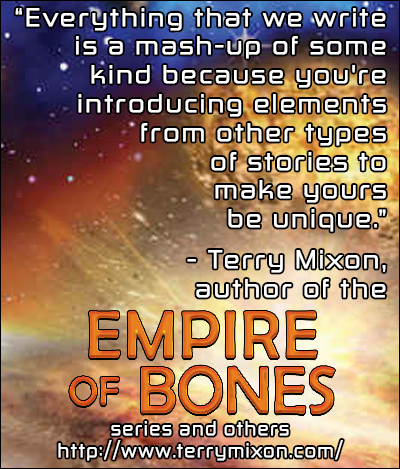 My current work-in-progess is a superhero novel. While there are more and more examples of superhero prose hitting the market these days, and the category on Amazon is constantly growing, this is still a fairly niche genre. I get that. What broader category, or genre, would my WIP fall into then? Action? Sci-fi? Should it matter? It does have a great deal of spoooOOOOOoooky in it. I mean, I AM a Monster Kid after all. But that doesn’t make it a horror story, does it?

Mixing superheroes with monsters and horror is nothing new, of course. These are the superhero stories I’m more drawn to, and I’ve read a lot of them over the years. And horror and superheroes isn’t necessarily new to superhero prose, either. Right off the top of my head, I can recommend Marion Harmon‘s Bite Me: Big Easy Nights, an installment in Harmon’s Wearing the Cape series. It features Artemis, his vampire-turned-superhero, and it’s awesome.

Sometimes, though, I do worry slightly about choosing to launch a superhero prose series with a supernatural-flavored superhero team and adventure. I suppose if Peter Clines can have superheroes dealing with a zombie apocalypse – and as of this post, there are five books in that series now – I can write about a cursed Egyptologist, a legacy-hero-style self-described witch, a vigilante slinging voodoo and six guns, and a former college football player whose body is home to one heckuva hot demon, right? I mean, they ARE the good guys.

And if those are the superheroes, can you imagine the supervillains they have to deal with?